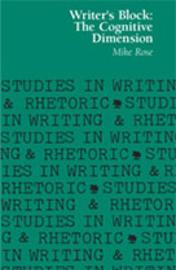 From the book jacket

Writer's block is more than a mere matter of discomfort and missed deadlines; sustained experiences of writer's block may influence academic success and career choices. Writers in the business world, professional writers, and students all have known this most common and least studied problem with the composing process. Mike Rose, however, sees it as a limitable problem that can be precisely analyzed and remedied through instruction and tutorial programs. Rose defines writer's block as "an inability to begin or continue writing for reasons other than a lack of skill or commitment," which is measured by "passage of time with limited productive involvement in the writing task." He applies insights of cognitive psychology to reveal dimensions of the problem never before examined.
In his three-faceted approach, Rose develops and administers a questionnaire to identify writers experiencing both high and low degrees of blocking; through stimulated recall he examines the composing processes of these writers; and he proposes a cognitive conceptualization of writer's block and of the composing process.

In drawing up his model, Rose delineates many cognitive errors that cause blocking, such as inflexible rules or conflicting planning strategies. He also discusses the practices and strategies that promote effective composition.

The reissue of this classic study of writer's block includes a new preface by the author that advocates more mixed-methods research in rhetoric and composition, details how he conducted his writer's block study, and discusses how his approach to a study like this would be different if conducted today.

This book can be purchased through Amazon.com, Barnes and Noble, or as always from your local independent bookseller.