The Mind at Work: Valuing the Intelligence of the American Worker. Tenth Anniversary Edition, 2014.

From the book jacket

In the tradition of Barbara Ehrenreich's Nickel and Dimed and Studs Terkel's Working, The Mind at Work is an illuminating reassessment of American labor. Testimonials to physical work have always celebrated the dignity, the economic and moral value, even the nobility of blue-collar labor, but rarely the thought required to get the job done right. The lightning-fast organization and mental calculations of the waitress; the complex spatial mathematics of the carpenter; the aesthetic and intellectual dexterity of the hair stylist—our failure to acknowledge or respect these qualities has undermined a large portion of America's working population. In The Mind at Work writer Mike Rose sets the record straight by taking a long hard look at the intellectual demands of common work.

Integrating personal stories of his own working-class family with interviews, vivid snapshots of people on the job, and current research in social science and cognitive psychology, Rose draws a brilliantly original portrait of America at work. As he probes the countless decisions, computations, and subtle judgments made every day by welders and plumbers, waitresses and electricians, Rose redefines the nature of important work and overturns the "hand/brain" dichotomy that blinds us to the real contributions of working people.

The Mind at Work is being praised by a wide range of reviewers, activists, and scholars.

This book can purchased through Amazon.com, Barnes&Noble.com and, as always, through your local independent book store. 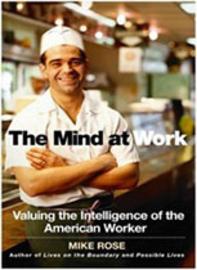 Praise for The Mind at Work

"This is an eloquent--as well as scholarly--tribute to our working men and women. Mike Rose cites chapter and verse in revealing the skills and intelligence of those that we tend to dismiss as 'blue collar' 'in service' or 'ordinary.' It knocked me out."
Studs Terkel, author of Working and Will the Circle Be Unbroken

"In this deeply humane book, Rose helps us see the human excellence on display all around us in jobs that often go unnoticed."
Matthew B. Crawford, author of Shop Class as Soulcraft

"Uplifting. The world is awash with intelligence. The Mind at Work is a tribute to [his mother], to his welder uncle Frank Meraglio, and to all workers whose labor is thought of as mindless. He shows a rare capacity to weave together elements of autobiography with broader speculations about the role of class in American education. Rose is after truly big game - nothing less than breathing new life into endangered concepts of democracy in our society."
Houston Chronicle

"An excellent corrective to the limited way that many of us understand intelligence. Deftly [shows] the pleasure and satisfaction people derive from the cognitive aspects of work."
Newsday

"The Mind at Work is simultaneously a celebration of blue-collar, usually lower-paid, laborers; a family memoir; and a learned treatise about different kinds of intelligence. The introduction alone is worth the price of the book, as Rose lays out his ideas in clear, often compelling language. perhaps no author before Rose has integrated the documentation and the theory so well in such an accessible manner."
The Denver Post

"Rose brings an openness and curiosity to his portrait of workers and a sympathetic eye to the challenges of their work. There's no condescension, pity, sappy moralizing or manifestos of class warfare. He looks at the multitude of complex and varied skills and intellectual prowess required to complete these jobs and puts it all into context. You can't help but have an increased respect for the mental part of labor as a result. It's well worth contemplating in light of the economy's ongoing evolution and the changing roles of workers."
The Miami Herald, selected as one of the best business books of the year

"A lot of solid life lessons and wisdom are in the pages of The Mind at Work. Though scholarly, it is written in an engaging style."
Orlando Sentinel

"Mike Rose startles us by suggesting that most of us have a narrow, cramped view of "intelligence" -- one that doesn't permit us to see the complex mental feats involved in very ordinary kinds of work. His book is a refreshing re-examination of what traditionally is meant by "intelligence." Conventional assumptions are overturned, and we begin to see that he is saying something profound about democracy."
Howard Zinn, author of A People's History of the United States

"Mike Rose shows how a reductive idea of intelligence obscures the intellectual content of everyday work, devalues the intellectual capacity of workers, distorts the priorities of public education, and contracts the meaning of democracy. With vivid and compelling stories he illustrates the efforts of hard-working women and men to maintain their dignity and find satisfaction in a culture whose beliefs and institutions denigrate their accomplishments. This book is brilliant, exciting, beautifully written – and essential."
Michael B. Katz, Walter H. Annenberg Professor of History, University of Pennsylvania

"In the era of the 'symbol analyst', too many of us peer right through waiters, hair stylists, handymen and other 'manual workers.' Thanks to Mike Rose's impressive eye, the accomplishments of these workers are now visible. We have much to learn from the elegance and integrity with which such individuals approach their daily labors."
Howard Gardner, author of Frames of Mind and The Mind's New Science

"Like Walt Whitman, Mike Rose celebrates the many forms that intelligence can take in a democracy. He reveals the depth of art and thought to be found in everyday work."
David Tyack, Vida Jacks Professor of Education, Stanford University

"We know beauticians and plumbers are smart because we hear them quipping on TV sitcoms. But Mike Rose shows us the special smarts that go into each snip of the scissor, each turn of a dangerously rusty bolt. Using brilliantly selected details from blue collar jobs, Rose analyzes the seamless weld between what we call mental and manual work and between abstract and concrete thinking. My everyday encounters with waitresses, electricians and handymen have been magically enriched since I read The Mind at Work."
Barbara Garson, author of All The Livelong Day: The Meaning and Demeaning of Routine Work

"What Rose has managed to do is to show that the common conception of intelligence has to be broadened and deepened in order to accommodate the cognitive skills of everyone and not just professional people. I believe that this concept should be taken seriously and that psychometricians and others who think about intelligence – what it is and how to measure it – should pause and consider the kind of intelligence that is used by working-class people. … The Mind at Work should be in institutional libraries everywhere and in the personal libraries of psychologists, economists, human resource specialists, and all social and behavioral scientists, no matter their particular specialties. Rose's prose glistens and glows from beginning to end!"
Contemporary Psychology: The American Psychological Association Review of Books

"This is a deeply scholarly, synthetic, and fully researched book, but Rose carries the academic apparatus lightly, never badgering the reader but rather pointing and probing, illuminating and inserting with the suppleness of a skilled welder."
Working Class Notes

"Through the closely rendered analyses in The Mind at Work, we see the forgotten side of the shop floor, the restaurant, the factory.… Rose's intent is hardly to pad gritty stories of lives on the margins with a nostalgic silver lining. Rather, he confronts an assumption about working-class labor that engenders a marginalization even more insidious than economic disparity. Perhaps because of disciplinary influences, scholarship influenced by cultural and critical theory has failed to notice a pink elephant at the dinner table, one whose presence nonetheless deeply influences beliefs about working-class labor and educational aptitude. This elephant at the table is, for Rose, views of intelligence."
Educational Researcher

"An engaging and timely book….Rose adroitly reaches across a variety of theoretical and methodological perspectives, including cognitive, developmental, sociological, cultural, economic, and historical traditions….Ultimately, The Mind at Work can be seen as a book about the soul of contemporary America, and the challenge that lies before us: to transcend our dichotomized views about work and intelligence so that we may see thinking and the growth of each human mind in a new light."
Mind, Culture, and Activity

"The Mind at Work is a book that is so pleasurable to read, so gentle and genial in tone, it is occasionally easy to forget how ambitious it is as well."
The Journal of the Learning Sciences