"Most of the fire in the national debate over school reform has come from those in favor of high-stakes testing of students, charter schools, and weakening of teachers' unions—until now. The very timely essays in Public Education Under Siege challenge the assumptions and goals of the so-called reform movement. If you want to understand why the movement will not bring serious change to the schools that need it most and may even make things worse, read this book. This is an extraordinarily valuable contribution to the national debate."
- Michael K. Brown, Department of Politics, University of California at Santa Cruz and author of Race, Money and the American Welfare State

***
This collection of essays edited by historian Michael Katz and me provides a compendium of brief, jargon-free treatments of a broad range of issues that should be part of current school reform discussion but typically aren’t. For example, we hear continually about the achievement gap, but not about income inequality, residential segregation, or imbalances in the way schools are financed. We hear little about language policy. The focus of mainstream school reform is on the schools, as it should be, but frequently with a pitifully thin knowledge of what goes on within schools themselves—the dynamics of classroom life—or of the social or economic history of the neighborhoods in which schools are embedded.

We hope that Public Education Under Siege can be a kind of sourcebook for people who want to expand the discussion of school reform.

I’ll reprint below the “roadmap” of the contents that we provide at the end of the introduction—which will give you a quick sense of the book. Then I’ll reprint the Table of Contents.

***
Public Education Under Siege is divided into three sections. Part I, The Perils of Technocratic Educational Reform, begins with Mike Rose’s use of his observations of classrooms combined with his research to explore the negative effects of current reform initiatives on schooling. This theme is picked up in Joi Spencer’s reflection on teaching mathematics to low-income African American students in the current reform environment. David Larabee argues that school reform proposals, notably value-added evaluation, ignore the actual characteristics of teaching as a complex and demanding form of professional practice, and Joanne Barkan investigates the education reform movement’s “high profile, well-financed, and seriously misguided campaign to transform the [teaching] profession.” Richard Kahlenberg is concerned about the “bipartisan and unfounded” assault on teachers’ unions, while Kevin Welner shows how conservative think tanks have influenced the adoption of market-based approaches to school reform by “progressive” reformers. Historians Harvey Kantor and Robert Lowe offer a trenchant overview of the mixed influence of human capital thinking on federal education policy, from the Smith-Hughes Vocational Reform Act in 1917 to the No Child Left Behind Act in 2001. In the section’s last chapter, Janelle Scott examines the civil rights claims of market-based reformers to argue that such reforms not only are disconnected from the issues that animated historical civil rights organizing, but also fail to tap into existing and vibrant grassroots organizing around educational inequality.

Part II focuses on the intersection of education, race, and poverty. Historian Michael Katz shows why public education is part of the American welfare state and how its recent history exacerbates income inequalities by following the same market-based trajectory as the rest of the welfare state. Pamela Walters, Jean Robinson, and Julia Lamber examine the use of school finance reform to equalize educational opportunities and find that shifts in the meaning of equality have allowed opponents of finance reform to undermine its equalitarian potential. Maia Cucchiara raises uncomfortable questions about public-private relations in school reform. She uses the example of a public school in a gentrifying city neighborhood to examine the equity issues involved in using public funds to increase the school’s resources in an effort to draw and hold middle-class families. Ansley Erickson compares the rhetoric of choice in the language of both desegregation and charter schools to obscure the reality of historic and present-day policies that structure inequality. In the section’s closing chapter, Heather Thompson examines the impact of the huge rise in incarceration on schools and children, arguing that massive incarceration is a neglected source of the achievement gap between whites and racial and ethnic minorities.

Part III proposes alternatives to technocratic reform. In the opening chapter, prominent education reformer Deborah Meier draws on the material elsewhere in the volume to reflect on recent reforms. Tina Trujillo and Sarah Woulfin profile a principal who exercises strong leadership in creating a successful public school for English-language learners, and Claire Robertson-Kraft highlights the polarized debate on teacher unionism and proposes a model of professional unionism to reconcile opposing positions. Paul Skilton-Sylvester cuts through polarities in the charter school debate with his description of how the environmental mission of K-8 charter school has helped the faculty hold their ground against pressures to narrow the curriculum to achieve higher test scores. Pedro Noguera connects the achievement gap to broader patterns of inequality in American society and presents lessons learned from schools that successfully educate poor children of color, while Eugene Garcia argues that reductive language policies have restricted learning and contributed to inequality of outcomes for English-language learners. The last two chapters focus on the role of public accountability and low-income parents in school reform. Eva Gold, Jeffrey Henig, and Elaine Simon draw on their research on mayor Michael Bloomberg’s assumption of control of the New York City public schools, and Rema Reynolds and Tyrone Howard give examples of the work of low-income parents in reforming their local schools.

In the final section, the editors look at what these chapters collectively tell us about education reform, followed by Mike Rose’s advice to young teachers.
***

Part IV. Conclusions
○ Chapter 22. What Is Education Reform?
​         Michael B. Katz and Mike Rose
○ Chapter 23. A Letter to Young Teachers: The Graduation Speech You Won’t Hear, But Should
- Mike Rose 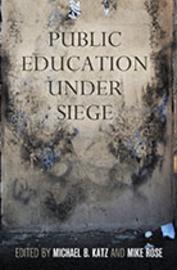 "The authors of the multiple chapters are deeply committed to the very idea of the public in general and the public school in particular....[This is] a fine collection, powerfully stated."
- Michael Apple in Education Review