Back to School is the first book to look at this growing population of “second-chances.” In the anecdotal style of his bestselling Possible Lives, Rose crafts rich and moving vignettes of people in tough circumstances who find their way; who get a second, third, or even fourth chance; and who, in a surprising number of cases, reinvent themselves as educated, engaged citizens.

In Back to School Rose reminds us that our nation’s economic and civic future rests heavily on the health of the institutions that serve everyday people – not simply the top twenty universities in U.S. News & World Report. Painting a vivid picture of the community colleges and adult education programs that give millions of Americans a shot at reaching their aspirations, Rose shows us one of the best ways we can help democracy flourish. This book can purchased through Amazon.com, Barnesandnoble.com, and, as always, through your local independent book store.

Second Chances
This is a book about people in tough circumstances who find their way, who get a second… or third… or fourth chance, who in some cases feel like they are reinventing themselves. Education can play a powerful role in creating that second chance.

At a time when public institutions are held in low regard and schools at all levels are under assault – for good reasons and bad – Back to School demonstrates what education can do, even though it was often earlier schooling that let people down. The stories in this book affirm the transformational potential of the college classroom, the occupational workshop, the tutoring center, the mentoring relationship.

One of the defining characteristics of the United States is its promise of a second chance; this promise is central to our vision of ourselves and to our economic and civic dynamism. When we are at our best as a society, our citizens are not trapped by their histories. Sadly this possibility is shrinking, partly because of a damaged and unstable economy but more so because of our political response to the economy. There are better ways to respond and to foster the growth of a wider sweep of our population. I hope Back to Schoolpoints us in that direction.

Praise for Back to School

"Mike Rose shines a light on institutions that are teaching students, young and old, how to rebuild our economy and put America back to work."
President Bill Clinton

"Mike Rose gets it. We either close the monstrous gap between academic study and skilled trades, or we fall into it. Back to School is a second chance not just for those individuals who need one, but for civilized life as we know it."
Mike Rowe, creator and executive producer of Discovery Channel’s Dirty Jobs.

"Whether the students Rose interviews are attending school for retraining, for the social interaction, or for a second chance at a better life, his prose pulls readers into becoming cheerleaders for them as they struggle to master basic reading and writing skills or learn the complexities of welding."
Kirkus Reviews

"Rose rethinks the role of college in American social and political life, offering moving arguments for higher education reform… Those working in post-secondary education would be remiss to ignore these crucial lessons."
Publishers Weekly

"Rose's idealism is the best kind: informed, tough-minded, self-aware....[We] should honor, and act upon, his profoundly democratic spirit."
The Cutting Edge

"Rose is a natural storyteller [with] an inclusive vision...A very important book."
The Daily Kos

"Impassioned, compelling...[Rose] has the knack of an experienced news writer for placing you on the scene."
Education Review

Writer and educator Mike Rose is perhaps best known for his insights into the educational lives of ordinary Americans – people for whom the promise of opportunity too often proves elusive. In Back to School, Rose turns his attention to the millions of nontraditional students whose little-known lives and experiences matter deeply to the country’s future.

As Rose points out, today closer to 45 percent of postsecondary students in the United States do not enroll in college directly out of high school. Following a tradition of self-improvement as old as the Republic, the “non-traditional” college student is now the norm.

From the Book Jacket 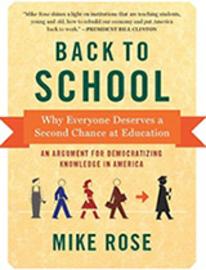